Masons in Philippine History
On January 11, 1897 thirteen men, Masons and members of La Liga Filipina were executed in Bagumbayan field (Luneta) on charges of treason and sedition.  They were arrested at the start of the revolution or on the basis of testimonies of those rounded up and tortured after the Katipunan was discovered and reported by Fr Mariano Gil and the Cuerpo de Vigilancia. Not all of them were members of the Katipunan but since Masons were considered subversives and the Liga Filipina was associated with Dr Jose Rizal they were all pronounced guilty and sentenced to death.

1. Moises Salvador
Moises Salvador was an insulare, born of Spanish parents on  November 25, 1868 in San Sebastian (used to be part of Quiapo), Manila. He joined Masonry and the propaganda movement while studying  at the Central University of Madrid.  When he returned to the Philippines, he helped Pedro Serrano Laktaw in organizing the first Filipino lodge, Logia Nilad No 144 and became its Primer Vigilante (Senior Warden).  Then in March 1892, he joined the organization and became Venerable Maestre (Master) of the second Filipino lodge, Logia Balagtas No 149 where Apolinario Mabini and Doroteo Cortes, (leader of the anti-friar “manifestation” of 1888) became members.
Salvador was the first to raise concern over the strict rules issued by  mother lodge Logia Nilad and to point out the “despotic” orders of Pedro Serrano Laktaw which led to the establishment of the first national Masonic organization in the Philippines, the Gran Consejo Regional de Filipinas in 1893.
He joined La Liga Filipina when it was organized   on July 3, 1892 with his father Ambrosio, who became its founding president.

2. Numeriano Adriano
Numeriano Adriano was one of the founders of Logia Balagtas No 149 in Sampalok, Manila. He was one of the proponents  of a central organization of Masons to replace Logia Nilad as mother lodge.
He studied law at the University of Santo Tomas and worked at the court of first instance in Manila.  Apolinario Mabini, his neighbor in Nagtahan worked as a copyist under him while studying law  at the University of Santo Tomas, in 1890.
Adriano was an active propagandist; a member of  La Propaganda (Junta dela Propaganda) which acted as local liaison of the propaganda movement in Spain.  He later joined La Liga Filipina when it was first organized by Jose Rizal.

3. Faustino Villaruel
Faustino Villaruel founded Logia Walana No 158 in 1892 in Binondo, Manila and Triangulo Vanguardia  in Hong Kong.  In 1893, he led the organization of Logia de Adopción (Lodge of Adoption), a women’s auxiliary, where his daughter, 18 year old  Rosario was initiated on July 18; the first woman to join Masonry.  Rizal’s sisters Josefa and Trinidad also became members of this lodge auxiliary.  Villaruel was a founding member of Rizal’s La Liga Filipina.
After the disastrous assembly called by Logia Nilad on March 25, 1893 where  it lost the support of other lodges, Faustino Villaruel called another assembly at his house in No 8 Calle Asuncion, Binondo on April 16, Sunday.   Nilad was invited but instead of attending, declared the assembly illegal and threatened suspension of those who would attend.  Lodges, however still attended the assembly.  In this gathering, the Grand Regional Council (Gran Consejo Regional de Filipinas ) was formed with Ambrosio Flores (Muza) as Grand Master; Numeriano Adriano (Ipil) as First Grand Vice-president and Faustino Villaruel (Ilaw) as Grand Second Vice-president

Domingo Franco
4. Domingo Franco
Domingo Franco whom Rizal entrusted with the Liga Filipina documents became the league’s president when it was revived on April 3, 1893. Born in Mambusao, Capiz, on August 4 1856 he was the third child of Ciriaca Tuason and  Juan Franco, a procurador judicial (solicitor) in a local court of first instance.
Franco grew up in Manila and studied law at the University of Santo Tomas where he met Apolinario Mabini.  He and Mabini became  neighbors in Nagtahan and members of Logia Balagtas No 149.

5. Jose Dizon
Jose M. Dizon first joined Logia Nilad No 144 and later founded and served as Venerable Maestre of Logia Taliba No 165 in Trozo, Manila.  In 1893 he became the Grand Fourth Vice-President of the Gran Consejo Regional de Filipinas.
He was the uncle of Emilio Jacinto, son of his sister Josefa Dizon Jacinto.  He was one of the founders of the Katipunan and therefore,   after the dissolution of the Liga Filipina in October 1893, he opted to join Andres Bonifacio rather than the “Cuerpo de Compromisarios” which sought to continue supporting the La Solidaridad and the Propaganda campaign in Madrid.

6. Benedicto Nijaga
Benedicto P. Nijaga  became a neighbor of Apolinario Mabini, Domingo Franco and Moises Salvador.  He was born in 1864 in Calbayog, Samar and as a young boy worked as a sacristan under parish priest Fr Sebastian Cordova.  A cholera epidemic in 1878  forced Fr Cordova to leave for Manila, taking Nijaga with him.  The priest sent him to school and a year  after  graduation, recommended  him to the Spanish army.  He rose from being a corporal to second lieutenant of the infantry.
During the raid of the printing press of Diario de Manila,  in Binondo, the authorities found his name in  a list of Katipunan members.  Nijaga was in fact, a collector of funds in the area and was arrested while soliciting donations. 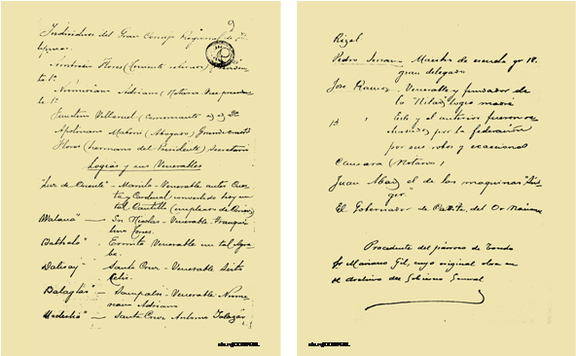 ​Cuerpo de Vigilancia file
​
List contains officers of the Gran Consejo Regional de Filipinas; Ambrosio Flores, President, Numeriano Adriano, Vice-president; Faustino Villaruel, Second Vice-president; Apolinario Mabini, Grand Orator; Flores, brother of Ambrosio, Secretary.  Also listed are lodges and their “Venerables”.  Antonio Salazar (y San Agustin)  is listed as master of Modestia Lodge. Footnote indicates copy was from Father Mariano Gil, parish of Tondo while original was in the general archives of the government.  (Image digitally enhanced by the IGLPI Journal)
7. Geronimo Cristobal Medina
Geronimo Cristobal Medina  was an infantry corporal in the Spanish army but secretly a Katipunan recruiter and according to the testimony of Dr Pio Valenzuela before the military court, the secretary of the Maluningning chapter in Bulacan.  He was alleged to have participated in the August 30 , 1896 unsuccessful raid of the arsenal in San Juan del Monte that started the revolution in Manila.    The trial was held on September 6, 1896 or roughly, a week after the San Juan incident.  Pio Valenzuela was a witness to the trial because he had availed himself of the amnesty declared by Governor General Ramon Blanco and surrendered on September 1, 1896. 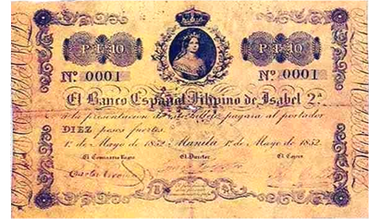 Bank note of Banco Español-Filipino
8. Francisco Luis Roxas
​Francisco Luis Roxas was a creole, born in 1851 in Binondo, Manila of a wealthy family, Juan Roxas and Vicenta Reyes.  He was a Consejero de Administracion (counselor or adviser) of the Spanish colonial government and a member of the board of directors of the Banco Español-Filipino  de Isabel Segunda, forerunner of the Bank of the Philippine Islands.  He contributed funds to the Liga Filipina but as a reformist and a prestigious figure in the colonial government, he refused to help the Katipunan. Reportedly, sometime in June of 1896 Benedicto Nijaga tried to solicit his contribution but Roxas instead threatened to report the movement to the authorities.  This prompted Andres Bonifacio to neutralize him and other wealthy oppositionists to his cause by making a fake Katipunan membership list.  Bonifacio had thought that implicating them would force Roxas and the others to donate funds.  However, both Nijaga and Roxas were rounded up in the wave of the arrests that followed the Katipunan’s discovery.
​
9. Antonio Salazar y San Agustin
Antonio Salazar, a native of Cavite served as Venerable Maestre of Logia Modestia No 199.  He was active in the propaganda campaign and the owner of "Bazaar El Cisne", located at the corner of Calle Carriedo and Calle Cervantes (or Dulumbayan, now Rizal Avenue).   His bazaar had a small printing press which he sold to Candido Iban and Francisco del Castillo in 1895; who in turn donated it for use by the Katipunan to print its official organ, the “Kalayaan”.  The newspaper was edited by Emilio Jacinto but in order to confuse the authorities, it was datelined Yokohama and listed Marcelo del Pilar as editor.  Its first issue was dated January 18, 1896 but actually released in March.

10. Ramon Padilla
Ramon A. Padilla a functionary at the port office of Manila under the Comandancia de la Marina almost had a “desafio” (duel) with Emilio Aguinaldo in the early days of the Katipunan.  According to Santiago Alvarez (1992), on April 6, 1896, he and Aguinaldo went to Manila to see Andres Bonifacio. While attending to some business at the port office, Emilio Aguinaldo resented the way he was treated by  Padilla and exchanged harsh words with him.  When Andres Bonifacio learned about Aguinaldo’s humiliation, he said that Aguinaldo should challenge Ramon Padilla to defend his honor and sent Pio Valenzuela and Jose Dizon to Padilla to arrange it.  Padilla however apologized and the duel was averted.

11. Luis Enciso Villareal
Little is known of Luis Villareal except that he was from Daraga, Albay and his parents Francisco Villareal and Maria Espinas owned an abaca plantation. He finished his Bachelor of Arts degree at a seminary in Naga. Villareal was a member of the propaganda movement.

12. Braulio Rivera
Braulio Rivera a clerk at the “Sub-inspeccion General de Montes”, was an active Katipunan member.  He led a section of the Catagalugan Council called “Katotohanan” and later formed and led another chapter called Balangay Gitna which was the  name of his birthplace near the corner of Zabala and Santo Cristo Streets in Tondo.
Policarpio Tarla,  Gitna Chapter’s treasurer was the superintendent of the printing house Ramirez y Compania, publisher of Diario de Manila.  Here in this press, on the basis of the confession of worker Teodoro Patiño to Fr Mariano Gil, parish priest of Tondo, were discovered Katipunan paraphernalia and a list of members  in a raid on August 19, 1896.  A wave or arrests followed. Rivera and Tarla were arrested on August 24. 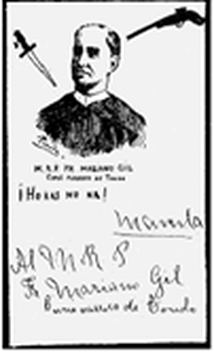 Warning to Father Mariano Gil, the Augustinian parish priest of Tondo who disclosed the existence of the Katipunan to the authorities.
13. Faustino Mañalac
Faustino Mañalac, symbolic name “Mayon” was a member of the Supreme Council of the Katipunan in 1895 when Andres Bonifacio  was the Supremo.  He was among the group  which included Bonifacio, Emilio Jacinto, Restituto Javier, Pedro Zabala, Guillermo Masangkay and  Aurelio Tolentino that trekked to the mountains of Montalban in Morong (now Rodriguez, Rizal) on a Good Friday, April 12, 1895 to look for a safe hiding place in case of  detection by the authorities.  They found Pamitinan Cave where they initiated new Katipunan members and where Bonifacio, with a stick of charcoal scribbled,  “Viva la Independencia Filipinas” (Long Live Philippine Independence) on its walls.
Manalac headed the Ilog Pasig Council of the Katipunan in Binondo.  His wife Marta Saldaña, was a member of the Katipunan women's section along with Gregoria de Jesus, Marina Dizon, Josefa and Trinidad Rizal.
A native of Cavite, Mañalac worked as a clerk in the Port of Manila administration. His father worked as a carpenter  in the naval shipyard  of Cavite Puerto.