Masons in Philippine History
Accounts about Felipe Buencamino (Sr) in Philippine history describe him quite harshly for shifting allegiance too quickly and then managing to obtain favor and positions of power and authority.
​
He succeeded Juan N. Aragon in 1913 as Grand Master of the Regional Grand Lodge of the Philippines (Gran Logia Regional de Filipinas) of the Grande Oriente Español.   This was the critical period when the all American  Grand Lodge of the Philippine Islands organized in 1912 was campaigning to assert its legitimacy in the country and in the international Masonic community by claiming that the Philippines was “Masonically free”.  As Regional Grand Master, Buencamino should have pursued a Masonic protest to protect the sovereignty of Filipino lodges.  He did not because he was extremely pro-American and declared; “I am an American and all the money in the Philippines, the air, the light and the sun I consider American.”

Teodoro M. Kalaw was elected  Grand Master of the Regional Grand Lodge in May 1915 and immediately caused the issuance of a protest against the American Grand lodge. He tried to rally Filipino Masons to support his plan to establish an independent Philippine Grand Lodge but, Buencamino’s  attitude and inaction had already given  the  Americans ample head start they needed to get into the minds of many Filipinos who were made to believe that Filipino lodges under the continental Gran Oriente Español were “irregular”.  The Americans claimed that they came to “regularize” lodges with their Anglo-Saxon style Freemasonry.
​
Felipe Buencamino was born on August 23,  1848 in San Miguel de Mayumo, Bulacan.  In 1859, he moved to Manila, where he completed  high school and took up Bachelor of Arts at the University of Santo Tomas.
He completed a law degree in 1884, was employed in the Audencia (court) in Manila; appointed fiscal and later judge of  Batanes in 1886 and Tayabas in 1888.
He fought under the Spanish flag during the revolution; rose from the ranks, and became a  colonel in the Spanish army.  But after the failed “Truce of Biak-na-Bato”  and upon the resumption of the revolution he switched side and even managed to land a position in Aguinaldo’s revolutionary cabinet.

General Tomas Mascardo
Suspected of being a spy, Buencamino was being detained in the tower of the Osorio family mansion in Cavite Puerto when 270 Spanish naval infantry prisoners  were presented to General Aguinaldo at Teatro Caviteño after the battle of Alapan, Imus on May 28, 1898.  From this vantage point, he witnessed the first unfurling of the  Philippine Flag. Buencamino remained guarded by General Tomas Mascardo until June 6, 1898.
Surprisingly, on June 12, 1898 he was seen at the declaration of Philippine independence in Kawit.   Later he  became a delegate to  the Malolos Congress and on September 26, 1898, was appointed to General Aguinaldo’s cabinet as Secretary of Development (Ministro de Fomento).

The first Philippine republic was inaugurated on January 23, 1899.  By February, Filipinos found themselves at war with their erstwhile American ally.  The war was triggered by the February 4 killing of a Filipino corporal in Santa Mesa, Manila by an American sentry and the massive attack against Filipino troops the next day.  The incident was investigated by Buencamino on orders by Aguinaldo.  His report put the blame squarely on the occupying American forces. Yet by May 1899 Buencamino was among those lobbying for the acceptance of American rule.

Secretary of State John Hay had cabled the  Schurman Commission authorizing it to offer autonomy under U.S. rule, to the Filipinos but Apolinario Mabini was opposed to the offer and preferred independence under American protection.  Buencamino together with Pedro Paterno and other influential members of the Philippine Congress  passed a resolution asking Aguinaldo to repudiate Mabini’s stand and relieve him as cabinet president.  Aguinaldo  under pressure, formed a new cabinet. Mabini was replaced by Pedro Paterno while Felipe Buencamino was appointed Secretary of  Foreign Affairs.
​
In one of their cabinet meetings, General Antonio Luna allegedly slapped Buencamino and accused his son Joaquin of cowardice.  Luna and Buencamino had another confrontation in Cabanatuan on June 5, 1899 just before General Antonio Luna and his aide Colonel Francisco Roman were killed. 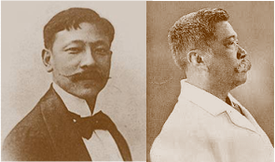 Pedro Paterno and Felipe Buencamino
​The Philippine-American war was still raging when Buencamino and Pedro Paterno led a group called the "Pacificados " and organized the Asociación de Paz (League for Peace) whose aim was to help the pacification campaign of General Elwell Otis and pave the way for American rule.  Among its prominent members were Trinidad Pardo de Tavera, Leon Ma Guerrero, Cayetano Arellano, Rafael Palma, Tomas del Rosario, Justo Lukban and Pascual Poblete.  In December 1900, the league changed its name to Partido Federal  whose aim was statehood for the Philippines.  They dominated politics for a while until 1907 when their opponents, the Nacionalistas  who advocated independence took control of the Philippine Assembly.   As more nationalist leaders emerged, the idea of statehood waned.  Buencamino died on February 6, 1929.