The Martyrs of Cavite

On September 12, 1896, less than two weeks after the outbreak of the revolution, thirteen men were executed by firing squad at Plaza de Armas near Fort San Felipe in Cavite Puerto, capital of Cavite Province.   Their arrest was preemptive and although no actual uprising took place in the city, they were tried and sentenced to death.  Ten of the thirteen were Masons:  Maximo Inocencio, Maximo Gregorio, Severino Lapidario, Luis Aguado, Alfonso de Ocampo, Victoriano Luciano, Feliciano Cabuco, Hugo Perez, Jose Lallana and Eugenio Cabezas. The non-Masons were Francisco Osorio, Antonio de San Agustin and Agapito Conchu.
Because of the untimely exposure of the Katipunan on August 19, 1896, Supremo Andres Bonifacio met with Katipunan leaders on August 23 and 24 in Caloocan, outside Manila where it was decided to start the revolt midnight of August 29. Mariano Alvarez president of the Magdiwang council of Noveleta, attended the meetings.   Upon his return immediately after his boat landed at Cavite Puerto, Alvarez contacted Katipunan member Severino Lapidario, the provincial jail warden and apprised him of the plan.  Alvarez also told him that they (Magdiwang) would launch sky rockets  once the Guardia Civil garrison in Noveleta was taken and that this would be the signal for Lapidario to release and arm   the  prisoners  of   the  provincial  jail. Mariano Alvarez also contacted Feliciano Cabuco and former La Caridad Gobernadorcillo Paulino Bailen. (Santiago V. Alvarez, 1992) 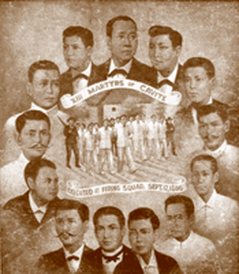 About this time, there were at least two known Katipunan chapters in Cavite; Marikit in San Antonio and Lintik in  San Rafael, both barrios in the vicinity of the Spanish military installations.   These chapters were organized by Maximo Gregorio, who initiated into them Severino Lapidario,  Feliciano Cabuco, José Lallana, and Eugenio Cabezas.
Bonifacio attacked Manila as planned but forgot to give the signal to Cavite. Nevertheless, Noveleta and San Francisco de Malabon  not knowing that the raids in Manila were unsuccessful, launched their own attacks; liberating their towns on August  31.
The Cavite Puerto conspirators did not act immediately. The delay in the uprising proved to be disastrous as  their plan leaked out. Severino Lapidario, Alfonso de Ocampo and Luis Aguado were  arrested on September 3.  They were placed in the cruiser Don Antonio de Ulloa and interrogated.  De Ocampo under severe torture revealed the names of the cabecillas (leaders) of the planned revolt.  He later tried to commit suicide out of remorse and had to be dragged to the execution site because of his wounds.

The Masons among the 13 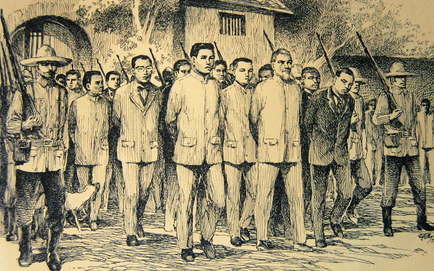 Maximo Inocencio
Born on November 18, 1833 in Cavite, Inocencio was married to Narcisa Francisco and had nine children.  He was implicated in the Cavite Mutiny of 1872 because he was a Mason; sentenced to ten years imprisonment and exiled in Cartagena, Spain together with fellow Masons Enrique Paraiso and Crisanto delos Santos. They were able to escape.  Later Inocencio crossed the border to France and from Marseilles, was able to obtain pardon. Upon his return  to the Philippines, he resumed his business in construction, trading, shipbuilding, logging and sawmilling.  He was  a contractor of the Cavite arsenal.

Maximo Gregorio
He was a Katipunan organizer;  born November 18, 1856 in Pasay, Morong (now Rizal); married to Celedonia Santiago with whom he had four children.   He was drafted into the Spanish colonial army while studying in Letran; inducted to Regiment No. 72   and  sent to  Jolo,  Sulu  to fight  the Muslims; upon his return, he was appointed chief clerk of the Comisaria de Guerra in Cavite.

Severino Lapidario
Severino Lapidario was to start the uprising by releasing the prisoners and arming them to join the revolution.  Born in Imus, Cavite, on January 8, 1847, Lapidario had been a corporal in the Spanish marine infantry and was   implicated in the Cavite Mutiny of 1872.  Later, he regained the confidence of his superiors and in 1890 became the alcalde (warden) of the Cavite provincial jail. He earned the respect of the prisoners because he allowed them occasional visits to their families. Reportedly,  he also sent them on secret propaganda missions to Noveleta, Kawit and Bacoor.

Luis Aguado
Aguado was the son of a captain in the Spanish navy. He became supply chief of the Spanish arsenal in Fort San Felipe. He married Felisa Osorio, sister of Francisco Osorio, the oldest daughter of Antonio Osorio, a Chinese-Filipino businessman reputed to be the richest in Cavite at that time. Luis Aguado's widow would later marry Daniel Tria Tirona.

Alfonso de Ocampo
A Spanish mestizo, a Mason and a Katipunero, De Ocampo was born in 1860 in Cavite and had been a sergeant in the Spanish colonial army before his appointment as assistant provincial jail warden.  He was married to Ana Espíritu and had two children. 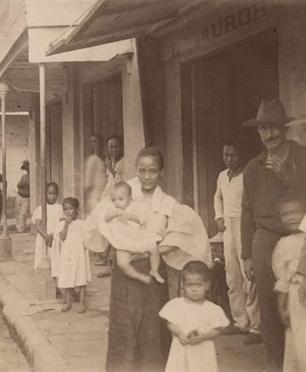 Antonio San Agustin's bookstore, La Aurora; a meeting place of the Katipunan.
Victoriano Luciano
Born on March 23, 1863; owner of Botica Luciano in Calle Real (now Trece Martires Street Cavite City), which was used as a meeting place of the Katipuneros.  A Mason, he kept contact with other Masons and  revolutionists in the Bicol region especially the Abella brothers who were among the Bicol martyrs executed in Bagumbayan on January 4, 1897.   He was a brilliant pharmacist,  a member of the Colegio de Farmaceuticos de Manila and was awarded by the Scientific Society of Brussels in Belgium for his formula for rare perfumes and lotions.

Feliciano Cabuco
Feliciano Cabuco at 31 was the youngest of the Thirteen Martyrs.  He was born to a wealthy family in Caridad, Cavite on June 9, 1865; married to   Marcela Bernal also of Caridad by whom he had two sons who died in infancy. He was working as a clerk in Canacao Hospital when he joined Masonry and later, the Katipunan.  His house was also used as a meeting place of the leaders (cabecillas) of the uprising.

Hugo Perez
Hugo Perez  was a doctor of medicine; born in 1856 in Binondo, Manila.   He was called Comandante by his fellow katipuneros and was reportedly, a Worshipful Master of a lodge in Cavite.

Jose Lallana
José Lallana  was a tailor whose shop was also used by the Katipunan as a meeting place.  He was born in Cavite in 1836;  was married to Benita Tapawan of Imus, by whom he had two children, Clara and Ramón. Ramón joined the Revolution to avenge his father's death, but never returned, believed to have been killed in action.

Eugenio Cabezas
Eugenio Cabezas was born in 1855 in Santa Cruz, Manila. He was a goldsmith and owned a jewelry and watch repair shop in Calle Real (Trece Martires Street) in Cavite which was also used as a meeting place by the Katipunan. He was married to Luisa Antonio of Cavite and had seven children.
​