Masons in Philippine History
General Emilio Aguinaldo was initiated into  Masonry on January 1, 1895 at Logia Pilar No 203 in Imus, Cavite.  His Masonic name was Colon (Columbus). Logia Pilar, named after the patron Saint of Imus, Nuestra Señora del Pilar, was founded by Rev Fr Severo Buenaventura, a Catholic priest; Juan Castañeda and Cayetano Topacio.  It was chartered by the Grande Oriente Español on June 5, 1894.

In 1896, between January and August, some members of Logia Pilar No 203 created Triangulo Magdalo in Binakayan, Kawit  Cavite.  However, it was overtaken by the events of the revolution and dissolved after its documents and paraphernalia  were lost and eventually forgotten.  (Susana Cuartero Escobés, 2006, La Masoneria Española  en Filipinas Vol 1, p 148)
It could be presumed that Aguinaldo was one of the proponents of the Triangulo Magdalo because in 1914, the name Magdalo was revived when Aguinaldo and ten other members of Logia Pilar formed Logia Magdalo in Kawit under the auspices of the  Gran Logia Regional de Filipinas.  On December 21, 1914,  it was chartered by the Grande Oriente Español as Logia Magdalo No 371.  Aguinaldo served as its Venerable Maestre  from 1914 to 1915.

Logia Magdalo affiliated with the American sponsored Grand Lodge of the Philippine Islands in 1917 and assigned the number 31.  In 1928 a rift among its members resulted in a petition to rename  the lodge which was  approved by then Grand Master Teodoro M.  Kalaw on October 10. Magdalo Lodge became  Ibarra Lodge No 31.  General Aguinaldo ceased to attend meetings and was declared dormant.
Logia Magdalo was later revived as Logia Magdalo No 79 by the Gran Logia Nacional de Filipinas  and still active today.
In 1955, General Aguinaldo was invited by then incoming Grand Master Camilo Osias as guest speaker for the 39th Annual Communications of the Grand Lodge of the Philippines. For such occasion, at Ibarra Lodge No 31,  (formerly Logia Magdalo No 371), Aguinaldo  at the age of 86, renewed his Masonic vows in the presence of grand officers the Grand Lodge of the Philippines.

Santiago Alvarez
Magdalo was Aguinaldo’s Katipunan symbolic name, derived from the name of  Kawit’s patron saint Santa Maria Magdalena.
It was his long time friend and brother-in-law, Santiago V. Alvarez who accompanied Aguinaldo (and Raymundo Mata) to Andres Bonifacio for initiation into the Katipunan in the evening of March 14, 1896.  Bonifacio’s house was located at  Cervantes street (now Rizal Avenue) in the San Ygnacio area of Bambang.  (Alvarez, 1992)
In his  memoirs  serialized in the weekly publication Sampagita from July 24, 1927 to April 15, 1928, Santiago Alvarez said he took notice of Aguinaldo’s prolonged initiation and attributed it to the Katipunan’s similarities to Masonry. 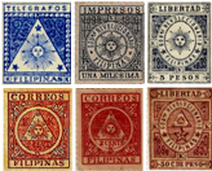