Masons in Philippine History
Graciano Lopez Jaena was initiated in Masonry in 1882 at Logia  Porvenir No. 2 in Madrid;  took the Masonic name Bolivar, and later served as its Worshipful Master. He also became a member of the original Logia Solidaridad (No 359) of the  Grande Oriente de España.
Years later, he helped organize Logia Revolución No 65, which was chartered in April 1889 under the auspices of newly established Grande Oriente Español of Grand Master Miguel Morayta.  He became its Worshipful Master, with Mariano Ponce as Secretary and Marcelo del Pilar as a member.    It was here where Ariston Bautista, Galicano  Apacible, Jose Alejandrino and many other Filipinos were initiated.
At this time, with the Grande Oriente Español being constituted and registered in accordance with the laws pertaining to associations of the civil government of Madrid, Freemasonry in Spain was considered legal or at least tolerated.
Logia Revolución  was the first Masonic Lodge founded by Filipino Masons abroad hence, this move was considered the first concrete step towards the formation of Philippine Masonry.
Graciano Lopez Jaena was an eloquent Filipino orator who showed anti-friar wit at an early age of 18 when he started his satire Fray Botod.  Botod was a fictional priest he likened to a furry seal without  whiskers; a “barrigón” (fat bellied; thus botod in Hiligaynon), ignorant, abusive, lecherous and immoral, with a warped sense of piety. It was not actually published, but the friars got hold of a manuscript and suspected him.  However, they  could not prove that he was its author.
Lopez Jaena was born in Jaro, Iloilo on December 18, 1856. He wanted to be a physician and enrolled at the University of Santo Tomas in Manila.  However he was not admitted for lack of the required Bachelor of Arts degree which was not offered in his first school, the Saint Vincent Ferrer Seminary in Iloilo.  He was instead asked to apprentice at the San Juan de Dios Hospital but later quit and returned to his home.
He engaged in some form of medical practice until  he  was asked to  attest that some prisoners died of natural causes and not by the hands of the Mayor of the town of Pototan.   His life threatened for his refusal, Lopez Jaena sailed  to Spain in 1880.  He enrolled in Medicine at the University of Valencia but soon lost interest and found his passion in writing and oratory.
According to Agoncillo (1973) his rise to fame as an orator started in 1882 in Madrid during the International Congress of Commercial Geography when he stood up to defend the indio and refute the statements of Fray Ramon Martinez Vigil who was extolling the “benevolence” of the friars he once visited in the colony. Lopez Jaena  was so impressive that even Spaniards were awed by his eloquence  in the Spanish language.
On another occasion, February 25, 1889, he spoke at the Ateneo de Barcelonés, a cultural center founded in Barcelona in 1860. His lecture was themed: “Filipinas en la  Exposición Universal de Barcelona” where he regaled his audience with a vivid,  colorful  description  of the  Philippines  with  its flora and fauna, its sceneries, natural resources, traditions and wealth;   then lamented the apathy and negligence of the central government and lambasted the friars in the country whom he called the personification of intransigence and impediment to progress declaring that  “. . . monasticism and progress can never live together.” Praising the exhibition of Philippine products, art and sculpture Lopez Jaena called the exposition  a brilliant protest against the label  of laziness  and  indolence imputed upon the Filipinos.
As awareness to the Philippine situation gained ground, the need for a continuing, sustainable  propaganda campaign  gave rise to the fortnightly La Solidaridad, subtitled Quincenario Democrático.  It was co-founded and edited by Graciano Lopez Jaena and  financed by Pablo Rianzares.  Its first issue appeared on February 15, 1889 in Barcelona.   In its first editorial, he explained its aims:
“Our aspirations are modest.  Our program, aside from being simple, is clear:  to combat reaction, to stop all retrogressive steps, to extol and adopt liberal ideas, to defend progress, in a word, to be a propagandist, above all, of democratic ideas in order to make these supreme in all nations here and across the seas.
“The aims, therefore, of La Solidaridad are described as to collect, to gather libertarian ideas which are manifested daily in the field of politics, science, art, literature, commerce, agriculture and industry.
“We shall also discuss all problems relating to the general interest of the nation and seek solutions to these problems in a high-level and democratic manner.
*  *  *  *  *  *  *
“With regard to the Philippines, since she needs the most help, not being represented in the Cortes, we shall pay particular attention to the defense of her democratic rights, the accomplishment of which is our patriotic duty.
“This nation of eight million souls should not, must not be exclusive of theocracy and traditionalism.” (In History of the Filipino People as cited by Agoncillo, 1973)
On its 19th issue, November 15, 1889 La Solidaridad  moved to Madrid.  Its editorship was transferred from Graciano Lopez Jaena to Marcelo del Pilar, who would continue its publication until its last issue on November 15, 1895. 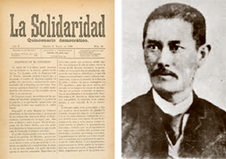 Lopez Jaena received no compensation as editor of the La Solidaridad except food and lodging and sometimes, some pocket money for incidental expenses.   He was said to have an eccentric character and his friends would chide him for the way he dressed  and  for his spending most of his time in cafes to imbibe in wine and spirits.   Finally his eccentric ways and life style caught up with him.  On January 20, 1896, Graciano Lopez Jaena died of tuberculosis and was buried in a pauper’s grave  in Barcelona.