Masons in Philippine History
Apolinario Mabini was a simple farmer’s son from Tanauan, Batangas possessed with determination, perseverance and ambition.  He proved that poverty was not an impediment to acquiring an education nor an excuse to mediocrity by supporting himself through his studies.  In 1881 at 17, he enrolled at the Colegio de San Juan de Letran, endured ridicule from his classmates for his shabby clothing, but earned the respect of his professors with his brilliant mind.  In 1887, he passed a government examination which earned him the degree of Bachelor of Arts and a Teacher’s Certificate with the title, “Profesor de Segunda Enseñanza”.  He took up Law at the Universidad de Santo Tomas, earned his degree in 1894, then passed the examination for licentiate in jurisprudence and became a member of the Colegio de Abogados.

Numeriano Adriano
It was while he was studying Law and supporting himself as a copyist in the Court of First Instance when he worked under Numeriano Adriano  in 1890.   Adriano was some eighteen years his senior and belonged to a circle of Filipino Masons active in propaganda work. Mabini’s close friendship with Adriano and his association with the propagandists could have made a profound impact on his social and political outlook  yet, he did not join the patriotic organization La Propaganda (Junta de la Propaganda) which was then the local liaison of the Propaganda Movement in Spain, nor the Liga Filipina when it was first organized by Dr Jose Rizal.  But in September, 1892, Mabini joined the six-month old Logia Balagtas No. 149 which was  founded by Numeriano Adriano, fellow propagandists Moises Salvador and Arcadio del Rosario.  Salvador was Mabini’s neighbor in Nagtahan;  del Rosario,  his private mentor in Civil Law.

Serrano Laktaw
In Masonry his legal mind came to be tested during the period referred to by historian Teodoro M. Kalaw as the “Democratization of the Fraternity”.  As early as his initiation there was already a developing conflict between Logia Nilad No 144, the “Mother Lodge” and  other Filipino Lodges,  over the question of lodge autonomy and management of Masonic affairs  which the lodges believed, were being infringed by Nilad particularly its secretary, Pedro Serrano Laktaw.  It was a question of Masonic rights, despotic orders, falsification of documents (of Logia Dalisay No 177), and personal attacks on Marcelo del Pilar.  The lodges questioned Nilad’s exercise of authority which they believed, belonged solely, to the Gran Oriente Español.  The lodges decided to break away from their “Mother Lodge”, but found themselves mired in organizational and legal constraints.  Mabini left  his  imprint in the history of Philippine Masonry  when he provided the legal and organizational bases for the formation of the Gran Consejo Regional de Filipinas (Regional Grand Council) in 1893; the first national Masonic organization  in the country under the Gran Oriente Español.

Mabini became Aguinaldo’s  chief adviser during the revolution.  He saw the bigger picture of the revolution and its implications in a post revolution scenario.  After the declaration of independence, he laid the foundation for the organization and administration of local governments, and later the  creation of a revolutionary congress.    His insights were ahead of his time. He crafted Aguinaldo’s decrees for the administration of justice and protection of human rights.
Apolinario Mabini was to the revolutionary government the ideologist and moral voice.  He wrote the "True Decalogue", a ten-point guide to citizenship and moral conduct which accompanied his constitutional program.   Due to the exigencies of the times, Mabini wanted a strong president, with congress serving as adviser.  But when he submitted his constitutional plan to congress, it set aside his proposals.  The representatives later agreed to frame a constitution along the draft of  Felipe Calderon  which created a strong legislative body instead. Calderon’s proposal to make Roman Catholicism as the state religion was however, defeated.  Mabini at least found vindication with the support of  Mason delegates.  The constitution was promulgated on January 21, 1899 after incorporating some of the amendments Mabini strongly urged.  The Republic was inaugurated on January 23.  But In February, the Philippine-American war began.

Mabini keenly observed the presence of social cliques fighting for dominance and self-interests.  He saw the ramifications of internal politics.  In spite of  the reversals suffered by the Philippine army against the formidable U.S. forces, he fought against negotiating peace with the Americans if it meant surrendering Philippine sovereignty.  But he later chose to quietly relinquish his post as head of Aguinaldo’s  cabinet  when congress suggested its reorganization in May of 1899.

His primary detractors who formed the new cabinet soon showed their inclination towards accepting American rule and were used by the Americans to divide the Filipinos.  This would also reflect on the division among the ranks of Filipino Masons later on, when the Americans, claiming exclusive territorial jurisdiction, transplanted their brand of Masonry in the Philippines, causing the displacement and eventual demise of the Grande Oriente Español and other grand jurisdictions in the  country. 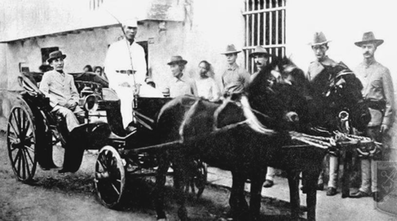 Considered a threat Mabini was re-arrested and exiled to Guam.
Mabini was captured by American forces on December 10, 1899 and released  on September 23, 1900.    Even after the capture of Aguinaldo, he did not submit to the authority of the United States.  He refused to accept American rule and questioned the legality of the occupation.  He maintained  his convictions and continued to assail American presence through his writings. His patriotic influence was deemed too threatening to American interests that in spite of his frail condition and infirmity he was re-arrested in January 1901 and exiled to Guam. While in exile he wrote his memoirs “La Revolución Filipina.” where he expressed, apart from his reasons for fighting colonialism, his sentiments and disappointments over what he perceived as major shortcomings of Aguinaldo and his government.
Mabini was not lacking in American sympathizers such as Senator George Hoar, who urged his release. However, there were stronger voices such as Elihu Root, the Secretary of War and William Howard Taft, the civil Governor of the Philippines (later President of the United States), who vehemently opposed his freedom. Taft expressing his fears that Mabini could cause a civil war in the Philippines described him as  "the most prominent irreconcilable among the Filipinos."
Eventually, Mabini was repatriated on February  26, 1903 only to die of cholera on May 13 of the same year.  He was 39.