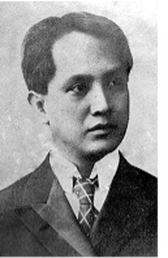 Galicano Apacible
Like other Filipino students, Apacible was drawn to the reform movement.  In 1888, he co-founded the Asociación Filipina Solidaridad en Barcelona.  He  became its president with Graciano Lopez Jaena as vice-president  and Mariano Ponce as treasurer. In 1889, he also co-founded the newspaper "La Solidaridad" (Quincenario  Democrático,  órgano de la Sociedad Mutua de Filipinos de Barcelona), and joined Logia Revolución No 65 of Graciano Lopez Jaena adopting the symbolic name "Lanatan."

Apacible was in the country at the outbreak of the revolution.  In danger of arrest for being a Mason, he applied as a doctor on board the British S.S. Zafire that sailed regularly from Manila to Hong Kong.  He resigned shortly and settled in Hong Kong.  He became an adviser to the Alto Consejo de los Revolucionarios (High Council of the Revolutionists) and during the resumption of the revolution in 1898, was appointed by General Aguinaldo as president of the Central Committee in Hong Kong.
He practiced medicine during the American occupation;  entered politics, becoming governor  of Batangas; later an assemblyman and vice-president of the Nacionalista party.  In 1917, he was appointed Secretary of Agriculture and Natural Resources, a position he held until 1922.
Apacible was born in Balayan, Batangas on June 25, 1864 and died on March 22, 1949.
Antonio Luna
29 October 1866 – June 5, 1899)
Antonio Luna was known for his strict  discipline and fiery temper.  He was a scientist, swordsman, sharpshooter, writer, Aguinaldo’s director of war, and considered the ablest general during the Philippine-American war  but sadly, remembered more for his tragic death in the hands of the Kawit troops of General Aguinaldo in Cabanatuan, Nueva Ecija on June 5, 1899.   He was of Ilocano parentage but was born in Binondo on October 29, 1866. 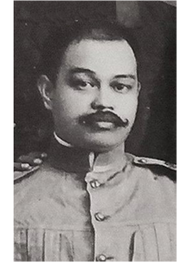 Antonio Luna
Antonio Luna was supposed to return to Manila with Pedro Serrano Laktaw to organize Filipino lodges but had to go to Paris, France.  Here, Luna together with Dr. Trinidad Pardo de Tavera and Dr. Ariston Bautista founded a Masonic triangulo under the auspices of La Solidaridad No 53 and initiated  Juan Luna, Felix Pardo de Tavera, Osmundo Evangelista and several others.
He wrote for the propaganda newspaper La Solidaridad, using the pen name Taga-ilog.
Although he did not join the 1896 revolution he was jailed in Fort Santiago then exiled  and imprisoned in Carcel Modelo in Madrid in 1897.  After his  release he studied the art of war under Belgian General Gerard Leman and returned to the Philippines in 1898 for the second phase of the revolution.  He established the revolutionary periodical La Independencia in September 1898.  In this newspaper was printed in 1899 the Spanish poem Filipinas of Jose Isaac Palma which was later adopted as the lyrics for Julian Felipe’s Marcha Nacional Filipina (now our national anthem).
In Malolos he established the first Philippine Military  School, the Academia Militar on October 25, 1898. Luna also served in the  Malolos Congress.
Tomas P. Arejola
September 18, 1865 - May 22, 1926)
Tomas Arejola was an active Mason in Spain and served as the secretary of Grand Master Miguel Morayta of the Grande Oriente Español.  A prolific writer, Arejola wrote articles in the liberal newspapers of Madrid: La Vanguardia, El Progreso, Heraldo de Madrid,  La Correspondencia de España and El Paris to campaign for political reforms,   representation in the Spanish Cortes and integration of the Philippines as a province of Spain.  He also wrote for La Solidaridad.

After the discovery of the Katipunan in the Philippines,  on August 21, 1896  the Governor of Madrid accompanied by deputies, public order and secret police agents sequestered the archives of the Grande Oriente Español and the Asociación Hispano-Filipina which were housed together at Calle Pretil de los Consejos.  An hour later the police searched  the residences of Masons of the Order including that of Grand Master Morayta. The following day, Tomas Arejola was arrested and detained for three days.  Grand Master Morayta escaped arrest because he was at the time spending summer in France.  (Susana Cuartero Escobes, Jose Rizal y la Masoneria, 1997) 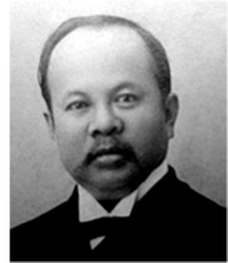 Tomas Arejola
Arejola was a brilliant orator.  In one of his speeches, he stressed why Masonry should be the model for the advocates of reform:
“If Masonry is then the supreme manifestation of democracy, for in democracy are found Masonry’s principles, teachings and tenets combined, there can be nothing more profitable and  logical for us—children of a forgotten country on the other side of the world– than to adopt those principles for our own and to become strong advocates of reform  if we truly wish to see the land of our ancestors redeemed and transformed from a neglected and downtrodden Spanish colony, poor and sickly, without rights or liberties, into a dignified, free and prosperous nation on the horizon of which the sun of justice and civilization will rise in full splendor.
“There is no place for doubt.  A Fraternity that, like Masonry, has existed and will always exist through the centuries, paying unremitting homage to the eternal verities, consecrating its efforts to the redemption of humanity, is the destined liberator to bring freedom and right to the Philippines.” (Cited by Kalaw, History of Philippine Masonry, p26.)

Arejola was born in Nueva Caceres (Naga City today) in Ambos Camarines (now Camarines Sur).  He went to Spain in 1886 to finish his law degree which he started at the University of Santo Tomas; graduating in 1888 at the Central University of Madrid.
He represented his town in the Malolos Congress in 1898.
He joined the organization of the Nacionalista Party in 1907,  and again represented Ambos Camarines in the Philippine Assembly until 1915.
Arejola died of tuberculosis on May 22, 1926.