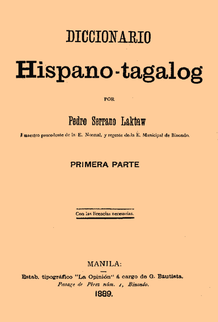 Born in Kupang, Bulacan, on October 24, 1853, Pedro Serrano Laktaw was a town mate and boyhood friend of Marcelo H del Pilar. He was a journalist and a teacher but more known as a lexicographer for   his “Diccionario Hispano-Tagalog”. Its prologue was written by Marcelo H del Pilar.    “Diccionario Hispano-Tagalog, Primera Parte was published in 1889” and gained international recognition.

Pedro Serrano Laktaw is said to have been the only Filipino to earn the degree of Maestro Superior from the Superior Normal School at Salamanca and the degree of Maestro Normal from the Universidad Central de Madrid. Laktaw also distinguished himself as a teacher for being the tutor of the young, (6 or 7 year old) Prince of Asturias who would later become King Alfonso XIII.

After Marcelo del Pilar had secured the proper authorization to organize Masonry in the Philippines from Miguel Morayta, Grand Master of the Grande Oriente Español, the task was assigned to Antonio Luna and Pedro Serrano Laktaw. Luna had prepared the regulations and an organizational plan but had to go to Paris, France so, Laktaw  left for the Philippines alone.  He arrived in the country in 1890 and immediately contacted Moises Salvador who had also just arrived and Jose A. Ramos.  With Timoteo Paez and others, they organized the first Filipino lodge which they named Nilad, in Calle Jolo No 12, Binondo.

The first officers were Jose A. Ramos (Socorro) 9°  as Venerable; Moises Salvador (Araw) 3°, Primer Vigilante; Lorenzo Tuason (Kamuning) 2°, Segundo Vigilante; Timoteo Paez (Raxa Matanda) 3°, Orador; and Pedro Serrano Laktaw (Panday Pira) 9°, Secretario.  Founding members were Tomas Tuason (Gunting) 1° and Jose Kaknio (Tumawa) 1°.
On January 6, 1891, Logia Nilad was constituted and on March 10, 1892, it was affiliated by the Grande Oriente Español and given the number 144.
Logia Nilad, the “Mother Lodge” felt that because the friars were becoming increasingly aware of  the rapid growth of Masonry in the country it was necessary to screen petitioners for degrees more carefully.  It issued on April 10, 1892 strict rules for all Lodges on the processing of candidates which included recording  derogatory remarks in a black book and satisfactory ones in a white book, for future reference. The lodges reacted negatively to these rules and felt that Nilad was usurping in many ways the authority of the Grande Oriente.  More serious reaction was directed to Serrano  Laktaw  whom  Moises  Salvador, now Master of Lodge Balagtas No 149 accused of  making improper use of authority, curtailing the Lodges’ freedom and prerogatives and encroaching upon the autonomy of the Lodges. Laktaw found himself increasingly isolated as more lodges joined in the complaints.  This was the start of his falling out of the Masonic and propaganda circles and friendship with Marcelo del Pilar.
​
Marcelo del Pilar was given power of attorney by Logia Lusong No 185 and Balagtas No 149 to act in their behalf and take up the matter with the Grande Oriente Espanol.  Lodges also launched a movement to create a new central governing body. On March 25, 1893 Nilad Lodge, apprised of the movement, convened an assembly where as events turned out, it lost the support of the other Lodges. 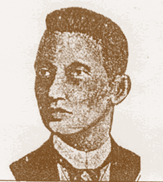 Faustino Villaruel
Another assembly was announced by Faustino Villaruel of Lodge Walana No 158 to convene at his house on No. 8, Calle Asuncion in Binondo, Manila on April 16 in order to decide on the appropriate central body in accordance with the Statutes of the Grande Oriente Español.  The agenda also included the issue of whether Laktaw would be allowed to continue working with the brethren, and to deliberate on the authority of Nilad over other Lodges.  Lodge Nilad, upon receiving the invitation cancelled the assembly, declaring it unconstitutional, and warned the officers who signed the communication, of their responsibility which “carried in itself the source of rebellion against the constitution of the Grande Oriente Español and the authority conferred on its deputy, the Mother Lodge.” Nilad also declared the suspension of the signatories from their Masonic rights and ipso-facto brought to trial.  The warning was ignored and Villaruel  proceeded to preside in the assembly.  Lodges Walana, Balagtas, Bathala, Taliba, Dalisay and Lusong were represented by their officers.  Apolinario Mabini made a convincing presentation of the remedy to the situation by justifying the creation of a Regional Grand Council or the Gran Consejo Regional.  After a thorough deliberation, it was decided to file an application with the Grand Council of the Order for the organization of the Regional Grand Council. 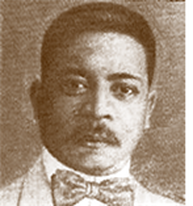 Ambrosio Flores
Ambrosio Flores, Numeriano Adriano and Apolinario Mabini were elected to form a commission to draft the internal regulations of the Regional Grand Council.  A cablegram was sent to Grand Master Morayta, followed by a letter from Villaruel on April 20, 1893 but, to their dismay, Joaquin Ruiz, Grand Secretary of the Order, acting on the protest of Lodge Nilad, sent a reply dated July 19, annulling the Regional Grand Council.  Marcelo del Pilar’s office in Madrid was swamped with letters from Flores, Adriano and others, refuting the words of Nilad and Ruiz. Mabini’s letter on September 18, 1893 subtly warned of severing “all ties with Ruiz, who seems to personify the Grande Oriente Español.”  Del Pilar brought the case directly to Grand Master Morayta who subsequently granted the demand and a charter was received. On December 10, 1893, the Gran Consejo Regional de Filipinas was installed.
Laktaw reportedly made derogatory remarks against  Del Pilar and even wrote  Morayta to discredit him but his insinuations and statements were refuted by the lodges.